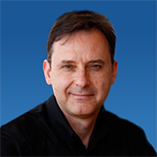 Bruce W. Crawley is one of ExxonMobil’s foremost technical experts, having joined the company in 1982. He leads a team of scientists and trackside engineers who develop innovative products and support motorsport partnerships in multiple categories around the world.

The racetrack is the ultimate stage for new technology and innovations. Advanced products go to work in race cars to improve their performance and efficiency. Motorsport defines Mobil 1. It’s integral to how ExxonMobil develop technologies and constantly push the boundaries.

Racing is all about improving at a very rapid pace – the team is looking for an improvement every two weeks. As a Technology Partner of McLaren-Honda, a team competing for race wins and championships, Mobil 1 scientists are under constant pressure to come up with new ideas. Even tiny upgrades can make the difference between winning and not. The secret is the ability to innovate and adapt.

As the technical demands of Grand Prix racing have changed, the Mobil 1 team has rapidly and successfully evolved its products to remain at the forefront of competition, just as the cars adapt continuously through each season. In 2015, with drivers only allowed four engines per season, a new Mobil 1 engine oil has been developed for the Honda RA615H engine to keep the engine clean and minimize friction and wear.

Longevity and performance are vital in Grand Prix racing, with each engine expected to cover thousands of miles while making more power from a smaller displacement. The lubricants must keep the engine’s internal surfaces clean and free from deposit build-up, and also prevents wear.

The hydraulic system is vital in nearly all aspects of a Grand Prix car’s performance. The hydraulics control gear shifting, throttle actuation, differential locking, the clutch and the DRS (drag reduction system). They even control the steering system that is essential to the functionality of the car. Simply put, the hydraulics are the nervous system of the car and above all else, need to be 100% reliable.

Mobil SHC Hydraulic Oil ensures, that the hydraulic oil in a Grand Prix car is capable of delivering optimum performance and is designed to operate at an incredible 200 bar, withstanding temperatures of over 100°C (212°F). Just like engine and gearbox oil, hydraulic oil needs to run blisteringly hot with as little fluid as possible so that efficiencies can be achieved.

To deliver maximum performance at every Grand Prix, Mobil 1 engineers continuously run a rigid programme of sampling and analysis of the product, ensuring its performance capability. Hydraulic oil and the hydraulic system are vital to the operation of a Grand Prix car and if these systems are not functioning correctly the car will stop.

The gearbox is extremely important to achieving success, as it is what delivers the cars power from the engine delivering it to the wheels. So making sure that the gears in the gearbox are protected, well lubricated, and that the heat’s managed properly, is all part of the challenge for the gearbox designer and the oil engineers.

Mobil 1 gearbox oil is unique in that not only does it help protect the gearbox it also maximises efficiency ensuring nearly all of an engine’s power can be translated into speed on the track. Because of this Mobil 1 gearbox oil is one of the top secret performance aids for the world’s best race teams.

For example, a Grand Prix gearbox is one of the most extreme environments in which lubricating oil is expected to function, being battered by vibration and subjected to high temperatures, furiously quick rotational speeds and vicious g-loadings. The contact pressures between the gears can be measured in gigapascals, at levels similar to those occurring in tectonic plate movement that causes earthquakes which is enough pressure to physically deform steel. These extreme conditions make it the perfect test bed for new ideas and an exciting challenge to develop new products.

Mobil 1 provides high-performance lubricant products for many motorsport teams around the world. In addition to this, we also provide trackside support from our expert engineers helping to improve reliability and reduce the risk of cars not finishing races.

Mike Frost, one of our racing engineers, is present at every Grand Prix race, and a key member of the McLaren-Honda team. The ExxonMobil Analytical Centre he uses provides the team with near real time information on the health and condition of the engine, gearbox and hydraulics. This trackside laboratory comprises of a spark emissions spectrometer which is used to measure the particles in the engine oil, the gear oil and the hydraulic oil. When the car comes back into the garage after every track session, a sample of the engine oil is taken and tested on the spot helping to diagnose problems early.

The oil analysis testing can detect a very fine distribution of wear metals and contaminants, including lead, indium, copper, tin and iron, which can be as small as one tenth the width of a human hair. Within a matter of minutes the samples are taken, analysis is made and we are able to report to the team with information to diagnose a problem such as a bearing breaking down or excessive gear wear. It gives the team a chance to put a defensive strategy in place avoiding the severe penalties for changing engine’s or gearboxes during a race weekend and increases the reliability of the cars ability to finish races.

Performance gains in motorsports are made through the improvement of every single aspect of a race car. Our job is to help get as much power, as efficiently as possible, from the engine out through the drivetrain and to the wheels. Some of the more hidden elements of wheel technology contribute to improving lap speed and wheel bearings are an important, sometimes overlooked, component.

With the tyres, the teams are looking for as much friction as possible to generate more traction. Wheel bearings work completely opposite to the tyres in that the friction needs to be reduced as much as possible in order to maximise speed.